Were these people insane? Were these Crowds ever thought next time might be their turn??

Were these Crowds ever smelled Humanitarian life???

Look at this picture with open eyes

What pleasure one gains of watching this atrocity??

Where is everyone…? Why this square is empty of human beings??!!

Isn’t it that tomorrow could be your turn to dangle the same way?

Where is this infernal place that they use constructing machinery for DEATH!?

Is this our Father Land? 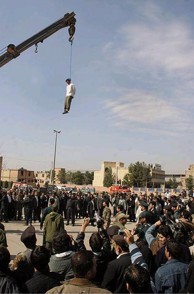 PAKDASHT, Iran, March 16 (Reuters) - Angry relatives of victims of an Iranian serial killer cheered, whistled and clapped as he was flogged, stabbed, slapped and finally hanged in public on Wednesday.

Around 3,000 people gathered in the main square of Pakdasht, south of the capital Tehran, to see the execution of Mohammad Bijeh, who was convicted of kidnapping, raping and murdering 21 people, most of them young boys.

Handcuffed and shirtless, Bijeh was first lashed 100 times by judiciary officials using electrical cables before the brother of one of his victims lunged from the crowd and stabbed him in the back, drawing blood. Police pulled the attacker away.

Bijeh, who together with his accomplice was dubbed a "Vampire of the Tehran Desert" by Iranian media, sank to his knees but remained silent throughout.

The mother of another young boy killed by Bijeh then slapped his face several times and cursed him while putting a blue nylon rope noose around his neck.

To cries of "God is Great" and "Make him spin so he will suffer more" he was lifted high into the air from a crane, dying the slow death by strangulation which is usual in public executions in Iran.

"I could not recognise my son after what this murderer did to him," sobbed another victim's mother.

Bijeh and his brick-maker colleague Ali Baghi were arrested last September and were sentenced to death in October on charges of kidnap, rape and murder. Baghi's sentence was later reduced to 15 years in jail by the Supreme Court.

They started to prey on children more than two years ago, but the killings did not come to light for a long time because most of the victims came from families of illegal Afghan refugees who were too afraid to report their children missing.

The pair disguised the smell of their victims' rotting corpses by killing cats and dogs and placing them near the bodies.

The death penalty in Iran is applicable in cases of murder, rape, adultery, drug trafficking, armed robbery and apostasy. Courtesy of: Rueter 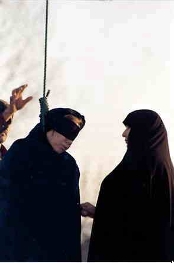