On November 15, 1977, Mohammad Reza Shah and Farah Pahlavi were official guests at the White House.

Outside, hundreds of Iran lovers, parents and children supporting their king and queen were chanting and happy to see their head of state again.

some masked and equipped mobs so-called Iranian students attacked the peaceful gathering of Iranian and American students of all ages with sticks and clubs.

This was a taste of what was to unfold in Mr. Jimmy Carter's Human Right agenda! the security was at its lowest level and, Khomeini's followers and some other opposition groups lead by Ebrahim Yazdi, communists, members of Mojahedin organization (MKO) attacked, helpless, youth, women, families while American mounted police stood watching the massacre

This is where Crime started first and how it is approved..! 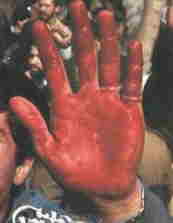